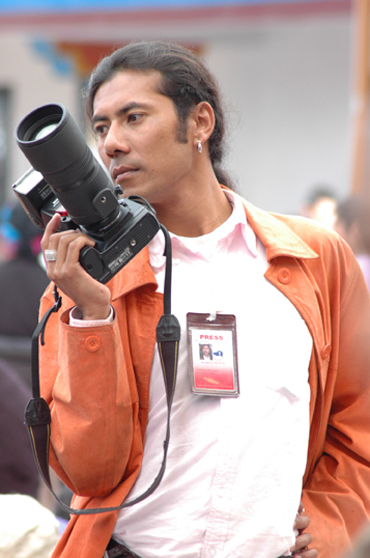 Lobsang Wangyal is a freelance photojournalist based in Mcleod Ganj, India. He contributes his stories and photos to Agence-France Presse, TibetSun, and McLeodGanj.com.

He is also a producer of art and other events. His chief productions are listed in the Productions page. These are mostly funded by himself through his photojournalism. He reached a high point in his career as a showman when he produced an event welcoming Prince Charles of England in October 2003.

In addition he is a web and graphics designer, and a passionate dancer. A complete list of his works may be seen here.

Lobsang Wangyal was born in 1970 in a small Tibetan refugee village in Orissa, East India. His father, Tsering Tendhar (late), was from Kham (Tehor), in eastern Tibet and his mother, Tsering Dolkar, from southern Tibet. They were in their teens when they escaped the Chinese occupation of their country in 1959.

He was graduated from the Central School for Tibetans, Mussoorie, administered by the government of India. After schooling he attended a college in Shimla, Himachal Pradesh, for his BA degree.

Except for a crash course in journalism, he is self-taught in both this field and photography. He has been working as a photojournalist since 1994.

Lobsang believes that photojournalism is the right weapon for him to fight non-violently for his country to free it from the yoke of communist China. He respects the Middle-Way Approach of his leader, His Holiness the Dalai Lama, to resolve the Tibetan issue with China.

He is indebted to a number of people for his success in his career as a photojournalist and a producer. He specifically would like to mention firstly his parents, and then NC Tripathi (Mussoorie), Jim Witherell (Santa Barbara), Ruthie (Seattle), and Tenzin Dhundup (Japan).

4 Responses to About Lobsang

This site uses Akismet to reduce spam. Learn how your comment data is processed.