Lobsang Wangyal has been documenting exile Tibetan life. particularly in its capital McLeod Ganj, for 27 years, from 1994 to 2021. Apart from having a sizable archive of almost all the events in McLeod Ganj during that time, his writing and photography have been published around the world. For two decades he was a stringer for Agence France-Presse dispatching from McLeod Ganj. Many books and magazines around the world have used his photos. When some celebrities visit McLeod Ganj, he becomes the local paparazzi

Following are some of the major publications that have used Lobsang’s works: 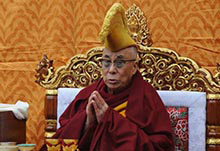 Sorry, comments are closed for now.